Department: Department of Biology at Humboldt University of Berlin 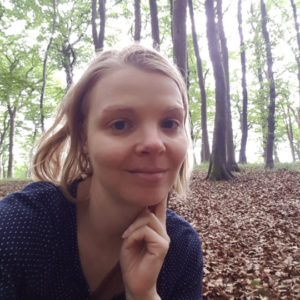 I became a mathematician at the age of 34. Having been raised and socialized in a non-academic environment, my graduation was a surprise for almost everyone around me. After gaining some professional experience as quantitative analyst, I decided to apply for a PhD position in the DFG-funded PhD program CompCancer. The program focusses on new computational methods in the context of cancer research. My research interest is the development and implementation of statistical algorithms for high throughput data to improve personalized cancer medicine.

I am trained to look for patterns. So a common pattern I noted in the day-to-day social interaction at my work place was that, no matter how insightful my contributions to the discussions with certain male colleagues were, I was likely to be ignored. A further pattern was that if I was addressing a colleague to start a conversation purely out of curiosity, he would assume that I was asking for help. Another pattern was that I would almost never be agreed with on something that matters. To give an example: I could “win” a trivial discussion on whether sushi is better than pho. However, I would struggle to find someone to voluntarily agree that, say, the method suggested in a new paper is preferable over the method we currently use.

Eventually feminist literature provided me with the language to give the elephant in my mind a name: gender bias. Within the framework of a feminist book club, I read current and classical feminist literature such as [1], [2], and [3]. It was simultaneously eye-opening and terrifying to get insight into the everyday sexism of today. My main take-home message was to not consider the situations mentioned above as patterns only I perceive. Instead, I recognize them as mostly subconscious results of the gender biased socialization of both sexes.

As a woman in a male-typed research area and being significantly older than my peers, I can subtly feel “the systematic underrecognition” [4] of my work, or the attempt to underrecognize me, in direct contact with peers in particular. There is a term for it: It’s called the “Matilda effect”.

As an example, during the first year of my PhD I was working on improving a published algorithm. In a group round I presented the paper and said that from now on now I was going to focus on the statistical properties of that algorithm. On that very same day, a former colleague implemented the same algorithm from that paper and presented his results to our former supervisor, who was impressed. As my former colleague’s implementation was different, it had worse statistical properties. It took me a stressful weekend to prove it. However, after the case was settled the blame was on me.

In another example, I was instructed without consent to work with a former colleague who had claimed at a meeting that he had expertise in the field of machine learning I was working on. After figuring out that the colleague had no background concerning the problem at hand, I told him that in his situation I would not have offered help. The colleague felt personally offended and wanted to stop working together. Eventually I was told that it was “stupid” to work alone, and that science would not work that way.

In a further example, during a lab retreat in Brandenburg, people were talking about psychoanalysis. I mentioned that I am fascinated by the concept. A newbie PhD student then made a derogatory and graphic sexual comment about women who attend psychoanalysis and laughed loudly. His statement was left uncommented.

To stay positive: I think it is possible to find a place in academia where you feel appreciated and welcomed with your voice, ideas and opinions and where you are not expected to agree on everything. However, it is likely that this will not be the first group you start with.

4. Do you have any personal experience with equal opportunities offers? What did you take away from them?

At my former university, I took part in a female leadership workshop that lasted a weekend. In one exercise, we were provided with an experiment similar to [4], where participants were asked to estimate a painting’s price, given the artist was male, female or of unknown sex. The results were in line with [4]. At that time, I could not associate the carved out underrecognition of female work with personal experiences. However, I was impressed by the workshop leader’s seriousness, as I had never experienced a woman fighting for the respectful treatment of women before. I left the workshop with a warm feeling of personal appreciation and empowerment.

Anything that raises consciousness about gender bias in male and female perception. Anything that improves the visibility of female positions that are not in line with traditional roles and stereotypes. Anything that decreases the sexual objectification of women. Anything that lowers the beauty standards for women.

Further, as we tend to be interested only in information that affects us personally, maybe it is more important to reach young women at this time, as it is mainly in their interest to make a difference. The increased awareness of racism can be credited especially to black people; just like the successes of the first two feminist waves can be credited particularly to the feminists of that time. It is up to the young and not so young women to speak up if they witness sexism, as they are the ones likely to face it. Therefore, it is their voice that needs to be strengthened and educated above all.

This might not be as straightforward as it seems, as amplifying a woman’s voice might imply interrupting men and dominating the course of the conversation. To get a feeling for the difficulty of this approach if you’re a woman, I suggest a challenge: First, raise a feminist issue in a mixed group or a group of men that is not familiar with the concept of gender bias. Second, try to keep this discussion going on a serious level for more than 5 minutes.