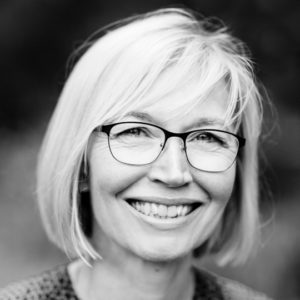 I’m originally from the USA and have lived in Berlin since the late 1990s. I did my bachelor’s degree in theatre at NYU and a master’s in English literature through the Open University, UK – so my educational background has nothing to do with science. I actually fell in love with Berlin while performing with an experimental theatre group! Some years later, when I was ready to “settle down” I began working at the Charité as an English native speaker science secretary. After a career break for children, I moved to NeuroCure as a management assistant. Over time, I was given more responsibilities relating to equal opportunity, and ultimately took on the role of dedicated EO officer within the Cluster. Since I’ve always dreamed of working in an international setting, and feminism has been a recurring theme in my theatre and literature work, what I’m doing now is a fulfilling combination of lifelong interests.

When I had children. What struck me was how differently this life change affected my and my husband’s respective careers. Before having children, we had very similar CVs – identical levels of academic achievement, and very similar job experience. During pregnancy, I was required to take protective maternity leave (Mutterschutz), he was not. His office culture at the time did not support his wish to take parental leave, so I was the only one who took an extended break. Ultimately, my husband continued to work full-time throughout this period because we relied on his salary, and after my career break I re-entered the work force part-time. This all had consequences for both of us: he missed time with his new-born children, and I moved into a position of financial dependency. And though we were career equals before the children came, if the two of us were to compete for the same job now, my partner would be able to show more work experience and might be considered more qualified. This kind of career and financial arrangement is often the only way for families to manage, and it’s done the same way by many couples. In that sense, I don’t think these decisions can be dismissed as individual personal choices, but must be seen as a systemic career disadvantage for women.

This type of story has particular relevance in a research environment, where careers advance or stall based largely on publication productivity. Career breaks in this context can lead to fewer papers being published within a given time frame, which can make a candidate appear less productive. For this reason, I am a strong advocate for calculating academic age, which adjusts, e.g., for family-related career breaks when evaluating publication productivity. This can help all candidates who have children, but because of the typical divisions of family labor, it affects women most.

I have been extremely fortunate that the Cluster’s leadership is strongly committed to supporting equal opportunities. However, I hear from colleagues at other institutions that this is not always the case. Yet support from leadership is crucial. There will be more acceptance and uptake of equal opportunity measures within an institution if people in high positions give their vocal support. Conversely, without the backing of leadership, it is very difficult to get traction. Ideally, EO officers and leadership should work closely together. Getting leadership on board and cultivating a good working relationship can be challenging, but it’s worthwhile.

4. Do you have any personal experience with equal opportunities offers? What did you take away from them?

As the contact person in the Cluster for measures to combine career and family, I see the impact of our measures for flexible childcare support. In a competitive field like science, when parents don’t have enough childcare to be able to conduct their research, it’s a high-stress situation for them – and it’s a tremendous relief when they know they can get some support. As a measure, childcare is not sexy, it’s nothing new, and it is not relevant for everybody – only for parents. But for those people who need it, it’s one of the most important things we offer. For women especially, it can make the difference between them staying in their scientific careers or being lost to the “leaky pipeline”.

There are many things that spring to mind – more childcare, more support for fathers taking parental leave, more activities to raise awareness about unconscious bias, just to name a few. But what’s been on my mind lately is a concern I’ve heard from some women that I have no easy answer for: tokenism. As one colleague put it, although programs to boost women’s participation are truly helpful, they come at a price. Once a woman is hired for a position, it can be hard to escape the perception that she was hired just because she is a woman. To make matters worse, this perception contains a hidden assumption (unconscious bias) that she was not actually hired because she was excellent. This is obviously not a satisfactory situation!

We – myself included – may need to rethink how we talk about equal opportunity and diversity measures. Maybe we need to do a better job of communicating that success in hiring more women is not due to favoritism or tokenism, but is rather the result of measures that level the playing field, so that all candidates can compete fairly and have an equal chance for their excellence to shine through.