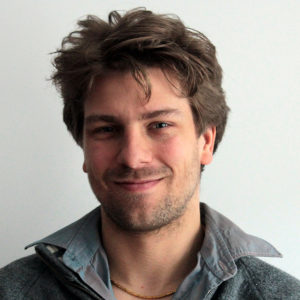 After ten years of basic research focusing on neurobiology of fruit fly behaviour, I was faced with the decision of following my supervisor to a different city or doing something else. My wife works as a set designer and we were starting to build a nice social network around us in Berlin, so we decided to stay. After being rejected for a DFG grant, I decided to take a different path. I founded a startup in 2013 but could not earn an living with it. From 2013 to 2018, I received unemployment assistance, took on several very short contracts to fill in for researchers going into parental leave, took parental leave twice myself and had multiple interviews at different institutions inside and outside academia. During that time, my interest in open science and data management turned into skills I could sell and I finally got a very nice (and off-site) position at the research data management help desk at the University of Jena. When I heard about the data curator position at the SFB1315, I jumped at the chance and I am very happy I got the job. I am also glad I could work part-time over a longer period, which gives me more time for my family and other projects.

While the absence of female professors in our biology department was striking during my studies in Switzerland, I only started to become conscious of the problem 15 years ago during my PhD studies, mostly because I was supervised by a feminist postdoc.

My interest in the topic has grown since then. And the role of socialisation became especially clear to me after I had children and realised that the problem is not limited to academia. Indeed, the social pressure my son has been experiencing is depressing. For instance, while his favourite color is still pink, he does not wear pink at the kita. Raising my kids in a gender-neutral way is also an everyday challenge. After all, I grew up in Switzerland in the 80s and my own biases are deeply anchored. This became even more important when I had a daughter, as the stereotypes are not in favour of female humans in our society.

My working time increased with each new position I had in academia. In my last postdoc position, I was working so much that my hourly wage went below that of a waiter; and I was still working less than my supervisor. It was still a very enjoyable life, and I had a lot of fun. But that was before I had a partner and a family. For me equal opportunity also means that your job allows your partner to have a career, something which is often incompatible with moving every 3 years and working extra hours. To be honest, I thought I could prioritise my family, while still having a career in academia. (After all, working times are flexible and there is no legal obligation to work extra hours.) I underestimated the difficulties and had to find a new path for my career. The positive thing is that I now know there is also a life outside of academia and that being a researcher is not the only interesting job around. Since April 2019, I have had a dream position (part-time, in a research group, very close to research), but this was only after I went through 4 years of great financial insecurity, as these positions are rare.

The SFB offers a child care service for special events, which I have been using. For example, once I picked up my children from the kita and brought them to the SFB summer gathering, which was planned from 4 p.m. to 8 p.m. A babysitter from Kidsmobil took care of them while I was listening to talks and conversing with other SFB members. This was much easier for me — and more interesting for them — than if I had had to find friends or a babysitter to take care of them. I hope more people would use this service for meetings as well.

I do believe that in the long run, the most effective solution is to have role models. This actually implies increasing the number of non-male (and non-white) professors students see and can relate to. Since the academic world seems not ready to accept quotas in professor choice, my first wish would be to develop a systematic approach to inclusivity in the preparation of conferences and workshops. While the Mozilla foundation gives nice examples and tips to start (for example, to choose speakers and moderators with quotas, to wait before taking questions and prioritise questions from non-male members of the audience), I think a professional consultant for this particular topic could be key to better event planning and moderator training.

I am also dreaming about seeing part-time and permanent researcher positions (what used to be called Mittelbau in Germany), which would allow people to harmonise the responsibilities of parenting and performing research.