Area of work: Synapses and receptors 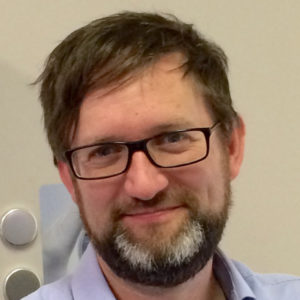 I always loved trying to build things, either in the computer or out of paper or metal or whatever. At university, I studied physics. I loved its simplicity, but at the end of my master studies, biology suddenly seemed much more interesting. I spent time in Biophysics, Pharmacology and Neuroscience departments and was lucky enough to respond to the NeuroCure call for junior groups in 2008. I moved to Berlin and my time is now spent between the Leibniz Institute for Molecular Pharmacology and Humboldt-Universität zu Berlin’s Biophysics department. I am interested in all kinds of quantitative analysis of neurotransmitter receptors and synapses.

Well, I studied at Imperial College and at that time it was about 80% male in the Physics department. Biophysics was an exception and therefore seemed to have a much better gender balance. I must say in Britain and even later in the United States, sexism in research was not so obvious to me. I was surprised when I came to Germany that so many patriarchal attitudes and structures existed – for example, there were hardly any female group leaders. Among my first mentors in biology were Silvia Onesti and Lucia Sivilotti; I had always been surrounded by very accomplished women. This deficit has been rectified at the Leibniz Institute for Molecular Pharmacology whilst I’ve been there, and the Berlin Senate ensures we make strenuous efforts at the HU to address the current gender imbalance when we make new hires. We have a strict zipper quota – we must invite at least one woman for interview for every man. This rule is powerful and influences the committee strongly.

The worst for me was, as a mentor, seeing the everyday sexism that my female trainees experienced. The group happened to have a female majority, and some other people in the institute called them “Andrew’s Angels”. After the initial bemusement, we discussed it, and the overwhelming reaction was one of disappointment. I was satisfied at the time that we overcame it as a group. Nowadays I hope we would clearly say “This is unacceptable and sexist” and expect a contrite response from the people involved. Looking back, I honestly cannot know how it affected the group members involved and that is the most difficult part. The impression this made on me is that it was very important to provide appropriate support in order to counter these very prevalent impediments. There were other incidents that were less intense and I was able to speak directly to the people involved on occasion (without making much of an impression, I fear). Incidences of sexual harassment that my trainees experienced or saw at conferences were also hard to deal with. In some cases, we could do something about it. I think we know that the atmosphere has changed recently and people are much more aware of issues surrounding sexism in the workplace.

I have of course received some equal opportunities training over the years, and I have indirectly benefitted from schemes that promote excellent women. For example, Anna Carbone who was a postdoc in my lab got a NeuroCure fellowship and we are still profiting from the research line she started in this time. However, I learned a lot more by reading and being interested in the topic and discussing with female colleagues (for example) than from any training from my employers. For me, equal opportunities training was most useful for opening up a discussion and bringing everyone in a committee or a group to the same page. I still fear I am strongly driven by unconscious biases, from my comfortable upbringing as a white man in the south-east of England. I get a lot of insight into equal opportunities and gender politics now from Twitter. I feel this is a good way to see alternate views and experiences and to connect to people who are different from me.

I was struck by studies on Swedish politicians that show that enforcing a 1:1 ratio (the so called zipper quota) measurably increases the quality of the politicians, because you lose principally the mediocre men. It was an epiphany for me to realise that this happens only because the women who were brought into the system by the quota must have been drawn from a pool with a similar distribution of abilities and essential qualities as the men had been. This suggests that you improve overall quality by enforcing equality, and it’s not only fairer, it’s nonsense to do otherwise. I think these data-driven insights should be more widely known and that zipper quotas should be everywhere.

In addition, we need to adjust many parts of the system to be more family friendly, especially since the burden of childcare typically falls on women. For example, if someone takes time out for caring for a newborn they should not lose their place on the salary scale, but that is what happens. In a way, it’s logical, you worked less. But looking at it the other way around, it penalises parents for their whole career by delaying all their subsequent pay rises. And because women are so often the ones to take time off to take care of children, these kinds of disadvantages disproportionately affect female researchers. We should normalise that childcare is important work for society, and parents should be able to count these years as experience for their promotion. Thinking carefully about parity is the bottom line.