Position: Managing Director of the CRC 951

Area of work: Management and administration 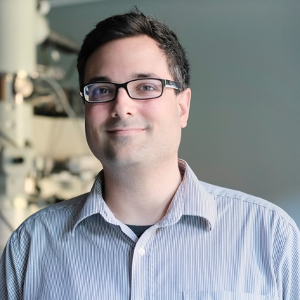 After receiving my doctoral degree from the Technische Universität Berlin for my work on silicon nanostructures at the Helmholtz-Zentrum Berlin, I was looking for a postdoc position in Berlin. My wife had a permanent position here, and I was also not too eager to leave Berlin and my family and friends here. So I was very happy to find an interesting and rather unusual position in the Collaborative Research Centre 951 (CRC 951) “Hybrid Inorganic/Organic Systems for Opto-Electronics” (HIOS) at Humboldt-Universität zu Berlin. Unusual because, in addition to the scientific part of the position, I was also responsible for managing the daily business of the CRC 951 such as the administration and acquisition of third party funds, organising workshops and colloquia, developing programs for public relations, gender equality and family friendliness, etc.

In the course of time I came to realize that the management part of my position felt more “rewarding” to me than the scientific part. I had the feeling that by managing the CRC and supporting its members I was able to do more for the scientific community than by growing samples in the lab. In accordance with the spokesperson of the CRC 951, I focused the majority of my time on the management side of my job. Since then we have developed new outreach programs for our CRC, many with a special focus on sparking an interest in science among female pupils e.g. “Forscherinnen-Tag”, “Praktikum beim SFB 951”, “HIOS Unilab module”, “Schüler experimentieren meets HIOS” and many more. Altogether, my position allows me to support the members of our CRC in various ways (see more examples in question 4) and to inspire new generations of scientists. I am very happy how things have turned out for me!

When I started studying physics at Humboldt-Universität zu Berlin (2003), I was not surprised that the number of female students was very low. In my advanced course on physics at school there were no female students at all. However, I was negatively surprised that not a single one of my lectures or seminars was led by a female professor. I was not aware that female scientists were that extremely rare in high positions in physics. I am glad that this has changed somewhat now.

What I found interesting was that almost all of the few female students were extraordinarily good in what they were doing (homework assignments, theory, practical courses, etc.), whereas among male students there was the typical spectrum of little, medium and highly motivated students. I wondered if female students would only consider studying physics if they were 120% into it.

I became more aware of the role of gender when I started my work as managing director of the CRC 951 and had to implement gender equality programs for the members of the CRC. I talked with many female scientists about what kind of programs they would like to see implemented, and mostly the answer was that they are fine with how things are now. But during an open discussion at our first HIOS gender equality workshop[1] with exclusively female participants (except myself), one of the female scientists spoke out about how she is treated in her mostly male group and what challenges female scientists have to face. Among these were derogatory comments from her colleagues about her intention to participate in the gender equality workshop, being marked as “hysterical” when talking back, and being overlooked when “the guys” continue discussions over a beer. Other participants confirmed that they had experienced similar problems. It was shocking and eye-opening for me.

Luckily, I have not encountered any major challenges regarding equal opportunities. The issues I mentioned in my previous answer did not apply to me, so I was not aware that these problems exist before I heard of them from others.

One of my tasks as managing director of the CRC is to establish equal opportunities offers and a family friendly work environment for the members of our CRC. We have implemented many programs for supporting young researchers by organising various coaching workshops, offering flexible and mobile child care services and helping to find vacancies in child care centers and are very proud to host the already mentioned three-day “HIOS gender equality workshop” once per funding period.

As mentioned before, organizing gender equality events for female researchers was not an easy task since many female members of the CRC did not wish to participate in any equal opportunities programs. They did not wish to be treated differently than their male colleagues. It was difficult to convince at least some of our female members to participate in our first gender equality workshop, which at that time was open only to female scientists. However, my impression was that once the workshop started, they enjoyed the company of other female scientists and the discussions with senior female scientists (our invited speakers) as role models. Still, several participants told me that they would prefer not to be part of programs that primarily act as equal opportunities offers or are advertised as such. Others deliberately wished to include male participants, in order to openly discuss gender related issues and to give them a chance for presenting their point of view. Since then we have also opened our equal opportunities programs to male scientists, whenever possible. Equal opportunities offers are in my opinion a good and essential component/idea but it worked out in our CRC only if it is not the dominant part of the corresponding program. In our experience female scientists might otherwise get the impression that they need “special support” or are – sadly –  mocked because of their participation in it.

As mentioned before, it is necessary that equal opportunities programs do not give the impression to female students that they have deficits, but rather make clear that the work environment in science does not yet provide equal opportunities to them. Therefore, most equal opportunities programs have female scientists as their target audience and aim to strengthen them in order to successful deal with these obstacles. In addition to this approach, I think there should be more gender awareness workshops that are open to all genders, in which subconscious biases are identified and eliminated in the first place, even those biases that are responsible for stigmatizing gender equality measures. The CRC 951 will have such discussion-based workshops during the next HIOS gender equality workshop.

I am also convinced that many problems concerning equal opportunities are related to gender stereotypes as well as false conceptions and expectations of what is required to successfully study a scientific subject. The necessity for early-on action in schools is described in several studies[2] which find that initially the interest of pupils in the sciences, and particularly physics, is not gender specific. However, from about 14 years of age on, girls’ interest decreases. This is actually where equal opportunities programs have to start. To prevent this loss and stereotypical thinking, we are refocusing some of our gender equality activities towards dismantling gender stereotypes, beginning already at the school level. We hope that the potential impact of our research on the development of everyday life sparks the interest of female pupils for a career in physics, chemistry, engineering, or the sciences in general. The interdisciplinary character of our CRC allows us to offer a variety of scientific programs for female pupils of all ages. It will be our goal to continue featuring exciting and stereotype-counteracting CRC content in recurring outreach activities so that future generations will start seeing physics as something not related to any gender.

[1] During the HIOS gender equality workshop female senior scientists, all experts in hybrid materials, from various countries present their current research in field of HIOS, and at the same time share their experiences regarding challenges and opportunities of female scientists, and how they overcame gender-specific obstacles. The participants discuss both science and gender related issues of female scientists with different cultural backgrounds. The workshop includes professional coaching seminars, with emphasis on the situation of female scientists.
[2] U. Kessels, B. Hannover, “When being a girl matters less: accessibility of gender-related self-knowledge in single-sex and coeducational classes and its impact on students’ physics-related self-concept of ability”, Brit. J. Educ. Psychol., 78, 273 (2008); “Physik in der Schule”, Deutsche Physikalische Gesellschaft e.V. – DPG (2016).